Coleford has a wealth of historic assets, many relating to its position as one of four key towns in the Forest of Dean . In addition to the Conservation Area in the town centre there are 42 listed buildings and scheduled monuments in the Parish including Whitecliff Furnace, Titanic Steelworks, Dark Hill Iron Works and “Scowles” (features associated with early iron ore mining). The town of Coleford (first recorded as Colevorde in 1275) grew rapidly, withthe War of the Roses leading to greater cohesion in the town centre following the Battle of Coleford 1643. It went from a small market town to a thriving industrial centre by the late 18th century. The changes in industrial heritage from coal and iron freemining, tramroads to railways, to manufacturing and services are all represented still. Names like the David and Robert Mushet, Dennis Potter are recognised in murals and the monthly market reflects the charter of 1661. The character of the whole is complex, based in industry and landscape and still shown in the spaces and places. Take a look at Coleford’sHidden Heritage App

We welcome any additional information that you may have, on the history of Coleford or the Town Council.

Much of the archaeology discovered in Coleford parish bear testament to the long association that the town has had with mining and quarrying. The most significant early archaeological finds in Coleford date from the late Iron Age and Roman Periods. Most of these finds have been located in the south of the parish probably associated with the extensive iron mining in the scowles around Puzzle Wood and the Stock Farm Roman villa site which lie just south-west of the parish boundary.

Over 2000 archaeological features can be found just in this one parish, but particularly noted, and easy to see are the Whitecliff Furnace complex, to the south-west of the town centre and secondly, the remains of the Dark Hill Iron Works to the south-east of the parish. Both sites are scheduled ancient monuments. Close to Dark Hill are the remains of the Titanic Steel Works, of which very little remains. All of these are associated with the Mushet family, who helped develop the steel industry.

Coleford was first recorded as Colevorde in 1275, and is one of four key towns in the Forest of Dean, on a routeway from Wales to Gloucester which was especially relevant in the Battle of Coleford 1643, when local people, annoyed at what they saw as the selling off the Forest by Charles 1, managed to defeat a company of Royalist troops heading for Gloucester. However, as a result the Royalists returned and the centre of town was burned down – which is why nowadays there is a Georgian character to this Conservation Area.

The Clock Tower and Cross indicate where the central octagonal church once stood, and adjacent, where the tree with seat is found, was where the Market House or Town Hall was located. The octagonal church was dismantled 1882, leavingthetowerbehind, andthecross islocatedonthesiteofthealtar.TheMarket House was pulled down and the centre altered in 1968 for highways improvements. There are 42 listed buildings beside the three scheduled ancient monuments and also “Scowles” (features associated with early iron ore mining).

The smallmarkettown in 1643 grewto athrivingindustrialcentrebythelate18thcentury. The changes in industrial heritage from coal and iron freemining, tramroads to railways, to manufacturing and services are all represented still. Names like David and Robert Mushet, James Teague date from that period.

Murals round Coleford illustrate such people, and also the more modern authors who hail from here, such as Dennis Potter, Winifred Foley. The monthly market reflects the charter of 1661.

The character is complex, based in industry and landscape. There are opportunities to learn more about it from local sources, with specific guided walks in Coleford Area Walking Festival and through Coleford’s Hidden Heritage App 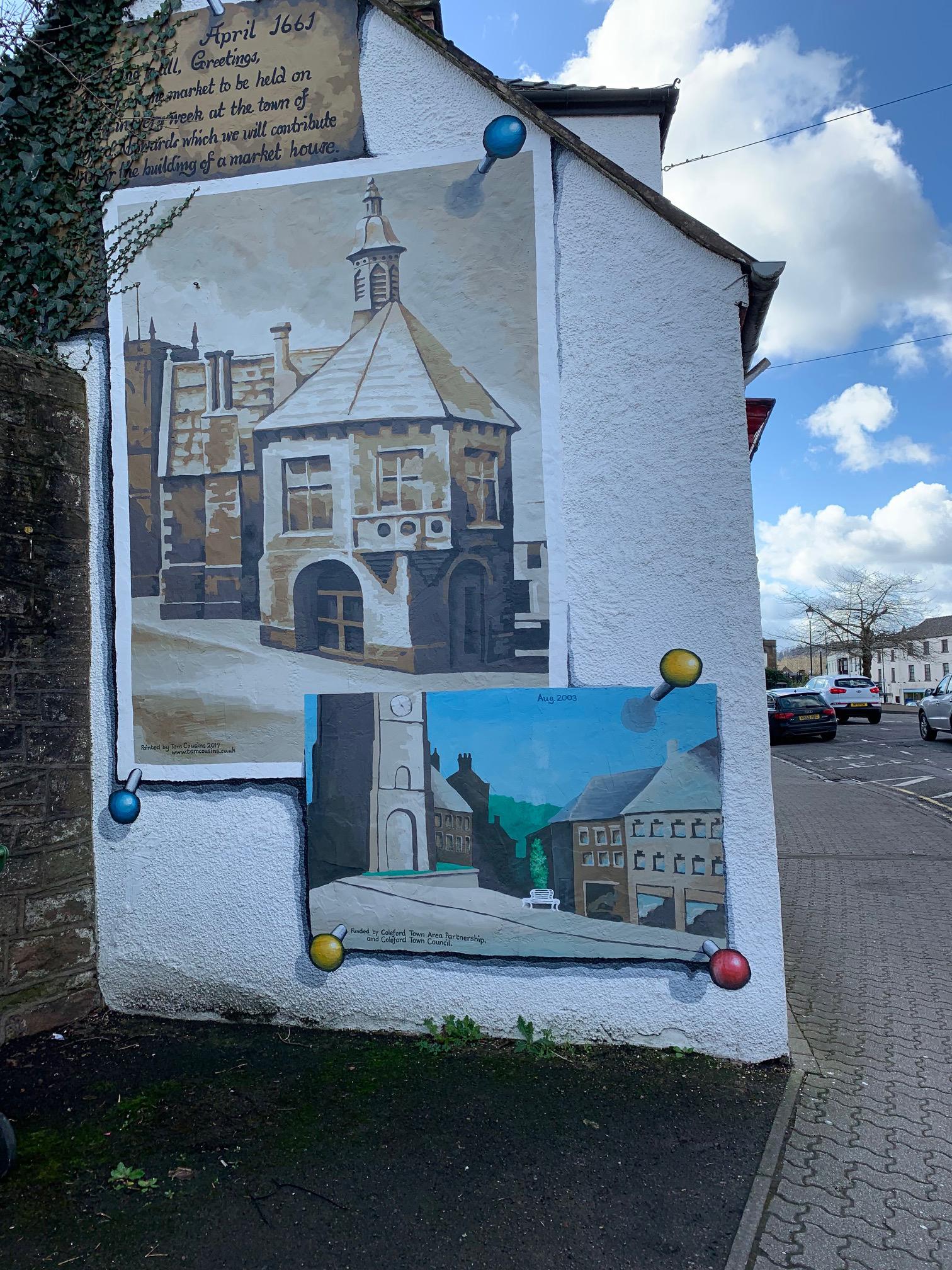